You are here: Things to Do > Windsor & Eton Brewery 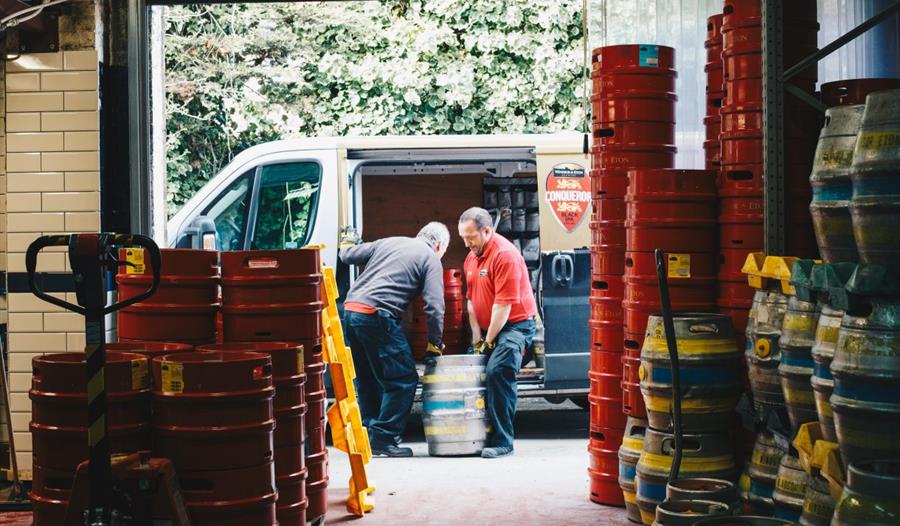 Windsor & Eton Brewery, which brough brewing back to central Windsor in 2010, brews beer using barley grown on the Windsor Farm and the spent grains are returned to the Farm to feed their cattle.

Windsor & Eton Brewery has won over 70 international, national and local awards, and have created collaborative brews with breweries in Australia, Europe, South Africa, Brazil and North America. It brews bottled beer for the House of Commons, Windsor Farm Shop, nationally for Waitrose, and for pub companies including Wetherspoon and Mitchell & Butlers.

It is run by four partners, who also operate The Old Court bar in Windsor’s Arts Centre and The George Inn in Eton where Royal Farm steaks are on the menu.

Fancy sampling locally brewed beer? Then look no further than Windsor & Eton Brewery. Since April 2010, we have been brewing great quality cask, keg and bottled beer, Guardsman (best bitter) being our first. We have gone on to produce over 40 different cask and keg beers that we sell nationally as well as locally here in Windsor and around London. Come along and visit our brewery shop and bar (opening times below) to have a beer straight from the tap room, enquire about our brewery tours or just to come and say hello.

We run The Duke Street Experience Brewery Tour every Saturday at 12:30.  Tours last 90 minutes where we explain the history of the brewery and brewing in the town, the brewing process including tasting of raw materials and of course, beer tasting!  The tour is ideal for individuals or small private groups.  Pre-booking essential, book here.

We host regular events in the brewery such as comedy nights (monthly) and Six Nations Rugby (Feb/March) and the annual Windsor Beer Festival. Visit the Events page here to find out more.

If you are looking for a meeting venue in Windsor with a difference then why not hop down to our brewery? Situated in the heart of the brewery, you can hire our meeting room for the whole day or just the morning or afternoon. Depending on layout, we can host up to 20 persons. After the work is done, why not round off with a short or full length brewery tour and see for yourself the revolution that is happening in British craft brewing? webrew.co.uk/meetings

Windsor & Eton Brewery has been granted a Royal Warrant of Appointment as Brewer to Her Majesty the Queen. The award allows it to display a designated Royal Coat of Arms on its products, stationery, premises and vehicles. To become a Royal Warrant Holder a business must have supplied goods or services to a Royal Household over a period of at least five years.