You are here: Home > What's On > Live at the Bandstand

Live at the Bandstand 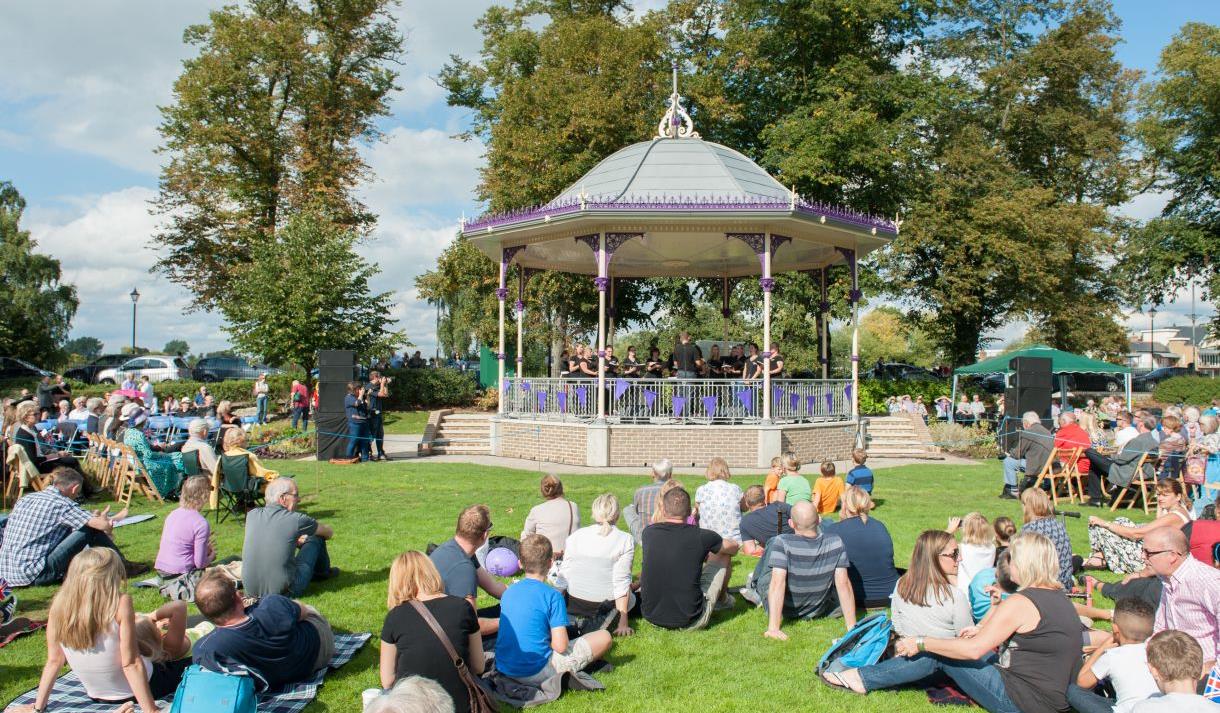 Come and celebrate as we present the Platinum Jubilee Summer Bandstand Programme in Windsor.

Windsor, Eton & Ascot Town Centre partnership will be presenting a series of musical performances each weekend between Sunday 28 August and Sunday 11 September 2022 at the bandstand in Alexandra Gardens.  Performances will take place between 2pm and 4pm.

Family, friends and music lovers are all invited to bring a picnic and enjoy some great music in Windsor’s Alexandra Gardens.

This event is free.  We'll be posting more details on the bands that will be performing, so please check back for the latest information!

Sunday 28 August: Platinum Jubilee Summer Carnival
Join us as we showcase the vibrant energy, beauty, culture and diversity of Africa and the Caribbean in all her expressions as we EAT. Live DJ & MC Entertainer.

Sunday 3 September: Bourne Concert Band
Bourne Concert Band are a friendly community wind band based in the Woking area. We regularly perform at bandstands and outdoor venues during the summer months.  The band plays music from all genres including traditional marches, music from stage and screen, light classical and music written specially for concert bands.  Musical Director is Tom Greenhalf, a serving Army Musician, who took up post in May 2019.

TCB has a popular and challenging repertoire, including classical transcriptions, original band compositions, music from stage and screen, pop and swing, and traditional marches! Each year the band performs a variety of concerts in and around Berkshire, including both indoor and outdoor engagements.

In addition to its annual series of concerts, TCB has held several popular full-day workshops led by top professional guest conductors, including Nigel Hess, and has toured Germany, the Czech Republic and Malta.

TCB’s current Musical Director is Paul Speed, who took up the post in 2012.

Saturday 10 September: Royal Harmonics
Under the direction of Sean Bui, Royal Harmonics are a 40-strong male chorus specialising in imaginatively staged and innovative performances of songs from across the spectrum of modern music. We bring our special brand of four-part harmony to pop, jazz/swing, barbershop, gospel, and songs from the shows.

In 2001, a group of friends came together to provide music at a wedding. After the last guests had gone home, the friends decided to remain together as a brass ensemble and rehearse at a church in Ascot. Thus ‘Ascot Brass’ was formed!

Within a year, Ascot Brass became a full brass band of 25 members, playing at fetes and celebratory events locally.

This continued until 2005, when Ascot Brass were invited by a senior executive at Ascot Racecourse to play at the racecourse’s prestigious ‘Diamond Day’. This was when the band’s association with the racecourse began.

Later that year, the band arranged and presented its first concert. A resounding success, the concert was played to an overflow capacity audience.

Since then, Ascot Brass has performed many concerts to raise funds for local charities, as well as at various events at Ascot Racecourse, including the racecourse bandstand’s commissioning performance in 2006 and the arrival of the Olympic Flame in 2012. They also became the first non-military band to play at Royal Ascot.

The band has also developed a close relationship with the Taplow Choirs, with whom they perform their annual Christmas Concert each year. One of the band’s favourite events of the year, this concert has gained a large regular following in the Royal Borough.

Now based in Maidenhead under the leadership of Musical Director David Rudd, Ascot Brass still has a regular engagement at Ascot racecourse and continues to hold concerts to raise money for local charities.