You are here: Home > Things to Do > St George's Chapel 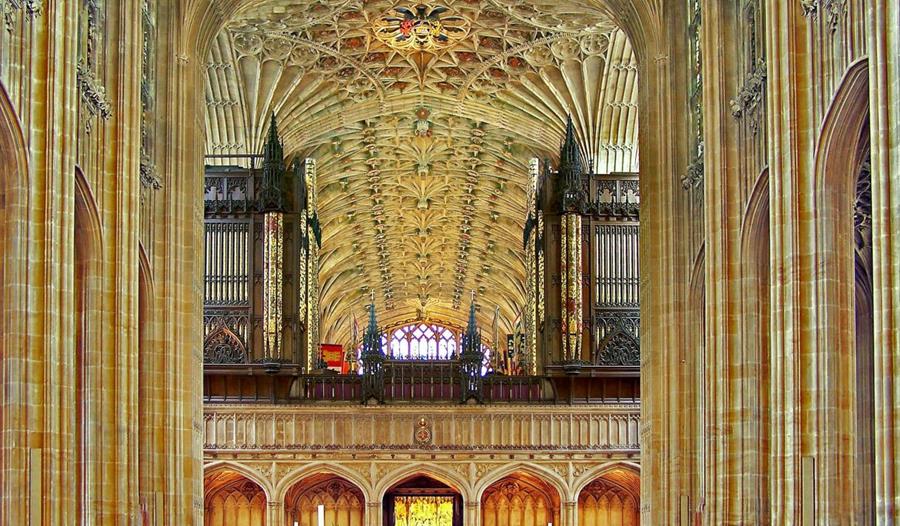 Take in the splendour of St George's Chapel, Windsor Castle, the burial place of 11 monarchs including Queen Elizabeth II, Henry VIII and Charles I, the setting for the marriages of Prince Harry and Ms Meghan Markle and HRH Princess Eugenie and Mr Jack Brooksbank in 2018 and one of the finest examples of Gothic architecture in England.

A visit to St George’s Chapel is included in your Windsor Castle ticket or you are most welcome to attend services at St George’s Chapel, which are free to all.  In St George's Chapel, the final resting place of Queen Elizabeth II can be seen by visitors on all days the Castle is open to the public, excluding Sundays.

St George’s Chapel is regarded as one of the most beautiful ecclesiastical buildings in England and is characterised by large windows and tall, slender pillars giving the impression of grace and elegance.  The chapel features remarkable examples of medieval woodwork and ironwork.  The magnificent Sovereign’s Stall dates from the late eighteenth century.

The Windsor burial place of kings and queens

St George's Chapel is the site of a number of royal tombs and memorials.

Further tombs and memorials include those of Edward IV, Henry VI, and King Edward VII and Queen Alexandra.  The sealed entrance to the vault containing the coffins of Henry VIII and Charles I is under the centre of the Quire.

The marriage of Prince Harry and Ms Meghan Markle

St George’s Chapel was the setting for the marriage of Prince Harry and Ms Meghan Markle on Saturday 19 May 2018.  The Dean of Windsor, The Rt Revd. David Conner, conducted the Service. The Most Revd. and Rt Hon. Justin Welby, Archbishop of Canterbury, officiated as the couple made their marriage vows.

St George’s Chapel is located on the north side of the Lower Ward of Windsor Castle.  Work on the present chapel began when Edward IV was king, in 1475.  The east end, or Quire (choir), was completed by 1484.

The magnificent stone fan vaulting that visitors can see today was added by Henry VIII, shortly afterwards.  In 1528 the chapel was finally completed, with the fan vault over the crossing.

The chapel is the spiritual home of the Order of the Garter, one of the oldest and most important orders of chivalry in the world, founded by Edward III in 1348.

Every June the Sovereign and the Knights of the Garter attend an annual service of thanksgiving in St George's Chapel, known as Garter Day.

Windsor Castle is a working palace and can be subject to full or partial closure so please click on the the 'openng times' tab on the Royal Collection's website for any provisional closure dates that apply to St George's Chapel.

St George's Chapel is a place of worship.  At least three services take place in the chapel every day, and worshippers are welcome to attend.

On Sunday the Chapel is closed to visitors – all are welcome to attend services.

You can also read more on the Royal Collection's website.

A visit to St George's Chapel is included in the price of the Windsor Castle Admission ticket.